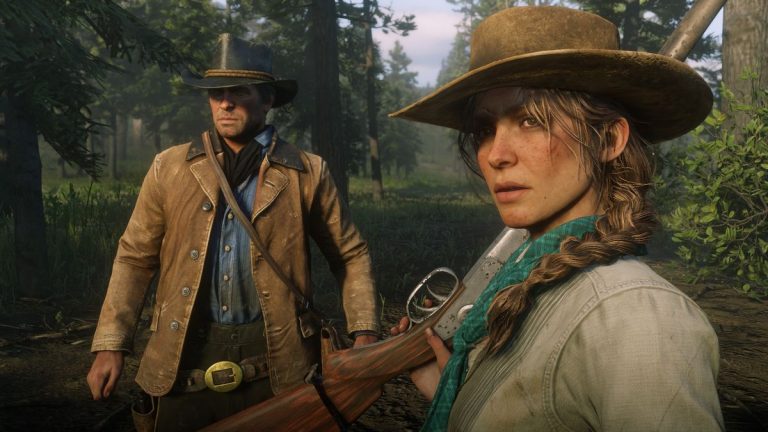 For the seasoned cowboy, a wintery blizzard sets a stark contrast to the open expanse of dirt and grass you may have been used to from Rockstar’s 2010 Red Dead Redemption western biopic, but there is sheer beauty in what has been produced for its prequel eight years later and it doesn’t yet cease to disappoint. Red Dead Redemption’s (RDR) prequel set in 1899 (12 years prior) follows the Van Der Linde gang, which fans may recall formed a significant part of the game’s objective with the previous protagonist, John Marston, setting out to track down his former gang and bring them to justice in exchange for his freedom.

This time around, the player follows the story of Arthur Morgan who forms a major part of the Van Der Linde gang being pursued by the Law following a botched ferry robbery. This provides useful insight to the backstory as you meet many familiar characters including a younger John Marston and are able to participate in the events that made the Van Der Linde gang so notorious.

Red Dead Redemption 2’s single player story mode consists of six chapters and an epilogue as well as numerous side quests to keep that cowboy inside content and entertained for hours on end. The single player mode, for the most part, consists of new areas not seen in the last Red Dead iteration but by the epilogue players can return to much more familiar territory. A number of missions do have the player to-ing and fro-ing a lot but there are trains and banks to rob, horses to steal for your personal stable, legendary animals to hunt using the new tracking system as well as trinkets which carry different effects.

The game’s controls and mechanics have been re-worked to take into account a number of new features such as horse bonding, interactions between NPC’s and the inventory of the player which is now split into three distinct wheel groups; weapons; items and horse. Much of the weapons from the 2010 game make a re-appearance, additionally with the ability to customise and maintain the effectiveness of your weapons which deteriorate through use. The way in which the player uses weapons has also changed, with the player choosing which weapons to carry from the inventory of their saddled horse, prior to any form of engagement. Items form their own wheel group and range from increases to health, stamina and dead-eye along with your trusty fishing rod, handheld lantern, binoculars and a bandana to help conceal your identity when you fancy. Finally, the horse wheel group provides a similar benefit to that of the item wheel but specifically with your horse to allow to regain health and stamina.

Red Dead Redemption 2’s major feature with horses is the ability to bond through riding, feeding and maintaining the condition of your horse which can provide permanent health and stamina boosts as well as being able to maintain control whilst predators are nearby, particularly useful if you fancy hunting big game to earn yourself some dollar. Environmental effects bring in a whole new dimension too, forget to eat or rest and your health and stamina cores can become severely affected preventing you from moving as fast or regaining health during a firefight, the flipside is that you can now set up camp almost anywhere and get that well deserved rest and craft items on the fly.

In contrast, RDR2’s online multiplayer which launched in beta almost a month after its initial launch allows players to report bugs providing Rockstar the ability to fine tune its online experience by staggering the number of concurrent players so they can stress test the servers and online environment. At present, this player limit is 32 but there is a supposed potential for that to rise in the future given the size of the map and the speed at which you can traverse. Players can join posse’s with up to six other players (a nice little nod to the magnificent seven perhaps?) where you can free-roam, take on co-op story missions, attack gang hideouts or play competitively through a number of multiplayer modes.

The online competitive modes consist of: Most Wanted (Deathmatch), Make it Count (Battle Royale), Name your Weapon (Scoring), Team shootout (Team Deathmatch), Hostile Territory (Domination) and a number of races sprawled across the vast map. With the craze of Battle Royale games still looming large, Rockstar has taken every opportunity to jump on the metaphorical bandwagon and introduced “Make it Count” which sees each player fight to the death on a shrinking level-playing field either using bows and a limited number of arrows OR six throwing knives which allow for many up-close and personal confrontations. There is bad news for campers too, stay too long in one spot and the game will warn other players of your location making you a prime target.

Fans are already anticipating the announcement of Undead Nightmare 2, which has been hinted at through a number of Easter eggs hidden within the game. For those not familiar, Undead Nightmare is a DLC which added a whole new 5-hour single player campaign and two online modes which meant it has been widely acclaimed as one of the best DLCs ever produced, surely if this is anything to go by, Undead Nightmare 2 will be worth the wait.

In summary, Red Dead Redemption 2 brings in all the positives of its predecessor whilst improving the core mechanics and gameplay without overly complicating matters. Like any game, there are of course improvements that could be made, I would have personally liked to have seen a similar horse travel mechanism to that of Assassin’s Creed Odyssey where you are able to set a destination in the map, hold a button and then let the game take you to the destination (as an alternative to fast travel) but do not let this and other very minor points detract you from the hours of enjoyment both in the single player and multiplayer modes that are likely to only improve over time with some polished refining.

Time to get that gun oil out, chew some tobacco and lasso your copy of Red Dead which is currently available on PlayStation and Xbox with a PC release likely in 2019.